Showing posts from June, 2011
Show all

I'm a list fiend. Making lists for me is therapeutic. Grocery lists, To-do lists, Favorites lists, Christmas lists, Lists of lists. Now that my birthday is in three days from now, excluding today, I thought it's a perfect excuse for me to make a birthday wish list!  Image from Goodreads Image from Goodreads 1.  The Arrival and/or Tales from Outer Suburbia by Shaun Tan Shaun Tan has been known to create stunning drawings, surreal and dream-like, which is my kind of thing. Go and check out the reviews made at Gathering Books for The Arrival  and Tales from Outer Suburbia . It's going to make you want this book too. Image from Goodreads Image from Suzy Lee's site 2. Wave and/or Shadow by Suzy Lee Both Wave and Shadow has amazing charcoal drawings by Suzy Lee and I just fell in love with the protagonist, a little girl. Wave reminds me of our yearly trip to the beach when I was a kid. Shadow has a surreal quality, which I have previously mentione
7 comments
Read more

Image from goodreads I have heard of Jon Scieszka's more famous work, The Stinky Cheese Man and Other Fairly Stupid  Fairy tales  (which I am hoping to get my hands on soon)  so when I saw his name on this book, I though it would be worth the read. The story is about three boys, one of whom owns a blue book that allows them to time warp. This time they are catapulted into 1887 Brooklyn, their hometown but this is not like the Brooklyn they know, but one with an unfinished Brooklyn Bridge, A missing Statue of Liberty, Zero cars or skyscrapers. And accidentally they happen to drag in a few "future" relatives as well as the famous inventor Thomas Alva Edison who happens to be acting a little out of whack. Thus, there is now the possibility of the light bulbs, phonograph, and electricity not being invented at all, putting at risk the world's future. Let me start of with the trio: Joe, Sam, and Fred. Joe's hobby is doing magic and he is the owner of the blue time
1 comment
Read more 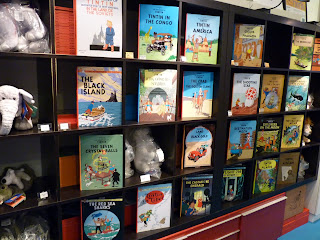 Thanks to a tip from Chris of Ficsation , I was able to drop by this awesome shop in Singapore. A shop entirely dedicated to everything Tintin! Drool-Worthy Hardbound Tintin Comic Books Tintin Posters and more Comic Books! Tintin in a spiffy car with his spiffy coat. A couple of Tintins and some of the gang. I apologize for the lousy pictures. You can check out their facebook page: The Tintin Shop (Singapore) . If ever you are in Singapore you can check them out by heading to:  56 Pagoda St., Chinatown, Singapore 059215 (Chinatown MRT exit A)
4 comments
Read more

Image form Goodreads I have picked up this book for about three times during my book store visits and ended up putting them back on the shelves in lieu of other titles. My wariness stems from a few things. One, I have not had success with a book by a Japanese author. Second, anything Man Booker related seems to be too much for my brain. But, I've read glowing reviews on it and technically Ishiguro is raised in England most of his life and I'm pretty sure that would influence his work and I love most books by British authors. It also helped that NBS had a sale going on as well. So I finally got a copy and was fairly surprised by it. Summary from Goodreads : From the Booker Prize-winning author of The Remains of the Day comes a devastating new novel of innocence, knowledge, and loss. As children Kathy, Ruth, and Tommy were students at Hailsham, an exclusive boarding school secluded in the English countryside. It was a place of mercurial cliques and mysterious rules where te
1 comment
Read more

The Knife of Never Letting Go by Patrick Ness

Image from goodreads I had high hopes for this book because it has received a lot of hype in the blogosphere and so far, I've never read a book that fell flat of its hype. Harry Potter and Hunger Games are some of the examples. So I was pretty excited to plunged into this new world. Summary form Goodreads : Prentisstown isn't like other towns. Everyone can hear everyone else's thoughts in an overwhelming, never-ending stream of Noise. Just a month away from the birthday that will make him a man, Todd and his dog, Manchee - whose thoughts Todd can hear too, whether he wants to or not - stumble upon an area of complete silence. They find that in a town where privacy is impossible, something terrible has been hidden - a secret so awful that Todd and Manchee must run for their lives.  But how do you escape when your pursuers can hear your every thought? My thoughts, exposed? This is what I consider the ulitmate invasion of privacy. And I began imagining myself in such a
3 comments
Read more

The Girl with the Dragon Tattoo by Stieg Larsson

Image from Amazon I have never really picked up a full pledge mystery book. I was never even into Nancy Drew as a kid. I was more of a Sweet Valley kind of girl. I like my whodunits  on TV or the movies. It's not because it isn't my type but it's more on the fact that I am so enamoured of the fantasy genre that I hardly buy anything else, save for  gifts or borrowed books. Every year my Wishlist seems to always be crowded with fantasy but this year, I believe my wishlists will have a huge chunk of  Whodunits thanks to Stieg Larssons's Girl with the Dragon Tattoo. Summary from Goodreads Mikael Blomkvist, a once-respected financial journalist, watches his professional life rapidly crumble around him. Prospects appear bleak until an unexpected (and unsettling) offer to resurrect his name is extended by an old-school titan of Swedish industry. The catch - and there's always a catch - is that Blomkvist must first spend a year researching a mysterious disappearance
1 comment
Read more

The Book Thief by Marcus Zusak

Image from wikipedia I was wary approaching The Book Thief by Marcus Zusak because of it being a  holocaust themed book. The Jewish persecution, Nazism, the World War all these would often leave me with a heavy heart. The same feeling that I got after watching Schindler's List and even only reading a part of The Diary of Anne Frank.  I was afraid that the material would prove to be too difficult for me to wade through. But surprisingly, I breezed through the book. Summary from  Goodreads : It’s just a small story really, about among other things: a girl, some words, an accordionist, some fanatical Germans, a Jewish fist-fighter, and quite a lot of thievery. . . . Narrated by Death, Markus Zusak's groundbreaking new novel is the story of Liesel Meminger, a young foster girl living outside of Munich in Nazi Germany. Liesel scratches out a meager existence for herself by stealing when she discovers something she can't resist- books. Soon she is stealing books from Nazi b
Post a Comment
Read more