Showing posts from March, 2012
Show all

Summary from Goodreads : The young magician Nathaniel is fast rising through the government ranks. His most urgent task is to put an end to the mysterious Resistance, but Kitty and her friends continue to elude him. As the pressure mounts, London is suddenly threatened by a new series of terrifying attacks. Is it the Resistance - or something even more dangerous? Nathaniel is forced to embark on a perilous mission to the enemy city of Prague; and to summon once again the troublesome, enigmatic and quick-witted djinni, Bartimaeus.  Once I have had success with the first book in a series, I hardly ever get disappointed with the sequels. In fact most often than not, I tend to like sequels more than the precedent. So I had a feeling Golem's Eye would be no exception and I was right. Plot-wise, it has become more engaging, for one, Nathaniel is faced with numerous adversaries and not just one. He has to contend with a Golem, an indestructible clay-formed figure which is controlled b
Post a Comment
Read more

Amulet of Samarkand by Jonathan Stroud

Summary from Goodreads : Nathaniel is eleven years old and a magician’s apprentice, learning the traditional arts of magic. All is well until he has a life-changing encounter with Simon Lovelace, a magician of unrivaled ruthlessness and ambition. When Lovelace brutally humiliates Nathaniel in public, Nathaniel decides to speed up his education, teaching himself spells way beyond his years. With revenge on his mind, he masters one of the toughest spells of all and summons Bartimaeus, a five-thousand-year-old djinni, to assist him. But summoning Bartimaeus and controlling him are two different things entirely, and when Nathaniel sends the djinni out to steal Lovelace’s greatest treasure, the Amulet of Samarkand, he finds himself caught up in a whirlwind of magical espionage, murder, and rebellion. I was eager to read this book because one, I've heard so much good about it. Second, I haven't really explored anything with genies in them save for Disney's Alladin. And who does
2 comments
Read more

In My Mailbox: Bartimaeus Trilogy by Jonathan Stroud 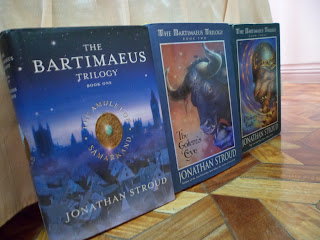 In My Mailbox is a meme hosted by Story Siren . It features books you have received or bought during the week. I now have the entire Bartimaeus Trilogy! All are used copies and the first book is of a different edition than the other two, so they are not really matchy-matchy. But when you're broke, you learn to overlook such things and not be too OC about it. Besides they are all hard bound! I no longer have to worry about spine creases and minute font sizes.  From what I've heard, this trilogy is something that is right up my alley so I'm pretty excited to get started. :D How about you? What's in you're mailbox?
2 comments
Read more

Cahills vs Vespers Book One: The Medusa Plot by Gordon Korman

Summary from the Back Cover: Thirteen-year-old Dan Cahill and his older sister, Amy, thought they belonged to the world's most powerful family. They thought the hunt for 39 Clues leading to the source of that power was over. They even thought they'd won. But Amy and Dan were wrong. One by one, distress calls start coming in from around the globe. Cahills are being kidnapped by a shadowy group known only as the Vespers. Now Amy and Dan have only days to fulfill a bizarre ransom request or their captured friends will start dying. Amy and Dan don't know what the Vespers want or how to stop them. Only one thing is clear. The Vespers are playing to win, and if they get their hands on the Clues . . . the world will be their next hostage. I had my eye on 39 Clues for awhile now but I haven't really gotten around to acquiring one so I was thrilled when I was one of the winners at the Filipino Reader Conference Raffle and got this book as my prize. (Special thanks to Scholast
4 comments
Read more
More posts